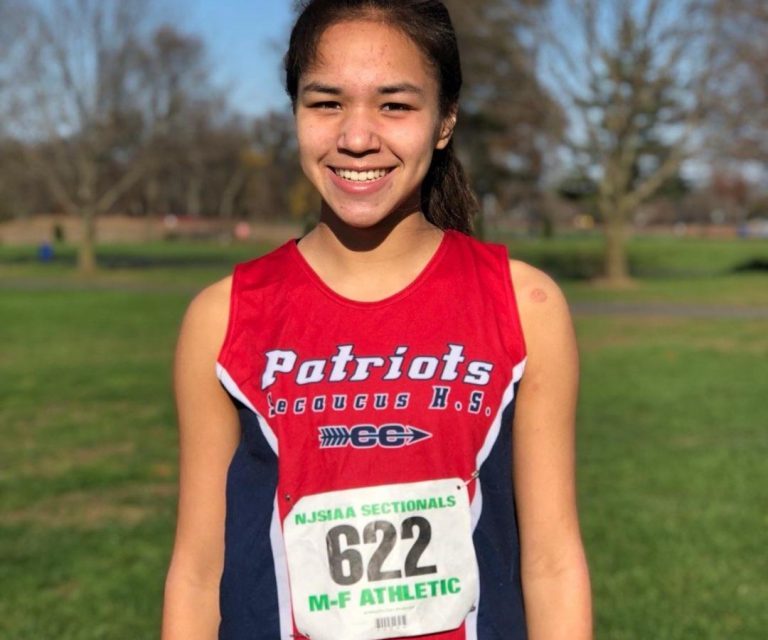 Haley Nowak wouldn’t begin to describe the kind of cross country season she just had to endure.

“It was pretty crazy,” Nowak said. “It was pretty annoying and frustrating. But we have to follow the rules. It was for the safety of others, so you couldn’t get too mad. It’s all for the best.”

The Secaucus High School multi-talented sophomore had to go through a two-week shutdown before the season started, then participated in a couple of races, then had to endure a 27-day quarantine period, where she missed out on three major events — the North Jersey Interscholastic Conference championships, the North Hudson championships and the Hudson County Track Coaches Association championships.

Incredibly, the Patriots were all on the bus, ready to head to the North Hudson meet, when they were pulled off the bus to be informed that they were under quarantine due to the coronavirus COVID-19 pandemic.

“It was tough,” Nowak said. “Actually, that day, we just got out of one quarantine and then had another.”

Nowak had a shot to win or at least place in the top five of all three meets. After all, Nowak finished fourth in the HCTCA race last year, so she was on target to perhaps do even better this time around.

From Oct. 12 through Nov. 6, Nowak and her teammates were without athletic supervision from the Secaucus coaches, especially legendary head coach Stan Fryczynski, who also happens to be the former athletic director at the school and the current executive director of the NJIC.

“Sure, it’s tough,” Fryczynski said. “There’s something to be said about running when the coaching staff is present to interject pace and distance.”

Fryczynski kept in contact with his team via Zoom meetings, where “The Man in the Blue Bucket Hat” set up workouts for the runners.

“They were capable of doing workouts together,” Fryczynski said.

But Nowak decided to go it alone.

“I ran a good amount, probably about 20 miles a week,” Nowak said. “It was just me and my phone tracking me.”

“There were times when I needed someone to push me,” Nowak said. “It’s really hard to run without anyone there and having to run on my own.”

Nowak said that she motored on her own around town.

“I sometimes made it onto the track,” Nowak said. “But it’s not the same as practicing with your team.”

Nowak is also an accomplished swimmer, a highly respected competitor with the butterfly as her predominant event. Her older sister, Juliet, is an NCAA Division I swimmer, who first went to Binghamton on a scholarship, but has since transferred to Marist College.

“I’ve been swimming since I was little,” Nowak said. “She’s a better swimmer than I am. It helps me a lot to have someone to look up to. I follow what she does very closely, because it gives me a taste of the future. Juliet is very supportive of me and offers advice.”

So during the time away, Nowak also headed to the Secaucus Recreation Center pool.

“I went swimming about four or five times a week,” Nowak said. “I think I’m a better swimmer than I am a runner.”

There are probably a lot of people who might debate that – especially after the events of last weekend.

At the NJSIAA North Jersey Group I state sectional championships at Oak Ridge Park in Clark last Saturday, Nowak showed no rust whatsoever. She sprinted out from the outset and romped to an easy victory, completing the tough course in 21:27.00, a full 32 seconds ahead of runner-up Abbey Hochreiner of Dayton Regional of Springfield.

For her efforts, Nowak has been selected as The Hudson Reporter Athlete of the Weekfor the past week.

“It’s amazing,” Nowak said. “I think there was a little bit of pressure on me, because people know what I did last year. I try not to let it get to me. I just try to go out there and do my best.”

Fryczynski said that Nowak and the entire team benefitted from a visit to Oak Ridge Park on Wednesday prior to the race.

“We still ran the practice in the pouring rain,” Fryczynski said. “It paid off in dividends.”

Fryczynski said that Nowak has a reserved personality.

“She’s a quiet girl, but she’s a fierce competitor,” Fryczynski said. “She speaks when she’s spoken to. She runs for us, then goes to swim practice. She’s been doing that dual capacity for a while now. She trains and trains hard. She is an excellent student and she’s erasing records left and right, writing her own story.”

“She’s put herself in the story line,” Fryczynski said, when asked about Nowak being the best he’s ever had. “If all goes well, the next few years could be exciting.”

And as for doing all she did during the pandemic?

“These were certainly extraordinary circumstances,” Fryczynski said. “They all had a month with no formal training.”

Nowak likes the idea that she owns a piece of history – as the only girl to ever win a state sectional title at Secaucus.

“It’s great to know,” Nowak said. “It shows me what I was doing during the time off was paying off. It’s really rewarding.”

The Patriots finished second as a team to Dayton Regional. Freshman Deborah Biru was fourth overall in 22:23.60, with teammate Carmelina Sanci sixth in 22:45.70. Sanci is a senior.

For McNair Academic, Rosaly Santos (8th in 22:50.30) paved the way, as the Cougars finished fifth as a team.

But the day belonged to Nowak, who is carving her place in Secaucus history as one of the best multi-sport athlete the school ever produced. And perhaps the best is still yet to come. – Jim Hague

Jim Hague can be reached via e-mail at OGSMAR@aol.com

Hydration is an important part of each day